The evolution of blockchain technology continues despite the correction in the cryptocurrency market. The number of people using cryptocurrencies has increased almost 3 times compared to January 2021. Technological progress has a chance to translate into the functioning of the financial system not only in developed countries, but to a large extent in countries where older technologies have not yet developed. As a result, these countries are a fresh, even ideal place to ‘instill’ new solutions without destroying the ‘old’ technological infrastructure and changing the habits of society. One of such transformations may be the use of innovative blockchain technology. The continent that has a chance to become the first large-scale cryptocurrency beneficiary is Africa.

How can blockchain technology affect Africa?

Africa is a place where cryptocurrencies have found their practical application partly due to the lack of trust in government financial solutions and rampant hyperinflation.

The key case of the use of cryptocurrency technology in Africa is the implementation of the so-called smart contracts. They automate transactions, thanks to which it takes place without the participation of intermediaries and without the risk of any error or crime during their processing. This solution could speed up the process of exchanging goods and ‘heal’ Africa, which is still a continent with a high percentage of financial crimes. It can also enable Africans to trade with citizens of developed countries such as Europe or the US, thanks to which societies can get rich faster.

Thanks to decentralization, cryptocurrencies can be exchanged in Africa outside the control and without restrictions from governments, which often do not enjoy the trust of local communities and block the development of trade. Thanks to Internet access, every inhabitant of Africa can use the cryptocurrency system and bypass these restrictions, obtaining the possibility of concluding transactions in their neighborhood and beyond, exchanging goods, which is often a problem due to the long distances between individual villages or cities.

Thanks to these solutions, cryptocurrencies can improve the quality of life of many citizens of African countries and accelerate economic development, facilitating trade and the process of exchanging goods while maintaining anonymity and security.

The use of cryptocurrencies by the people of Africa is growing rapidly. In 2021, the number of cryptocurrency users in the continent grew by 2,500%. Analysts from the KuCoin exchange expect that in 2022 this growth will accelerate and will amount to 2670%. Nigeria leads the way, where according to statistics, every third inhabitant owns cryptocurrencies. Combined with rising birth rates and high fertility, Africa can be a very important catalyst for the adoption of new technologies. 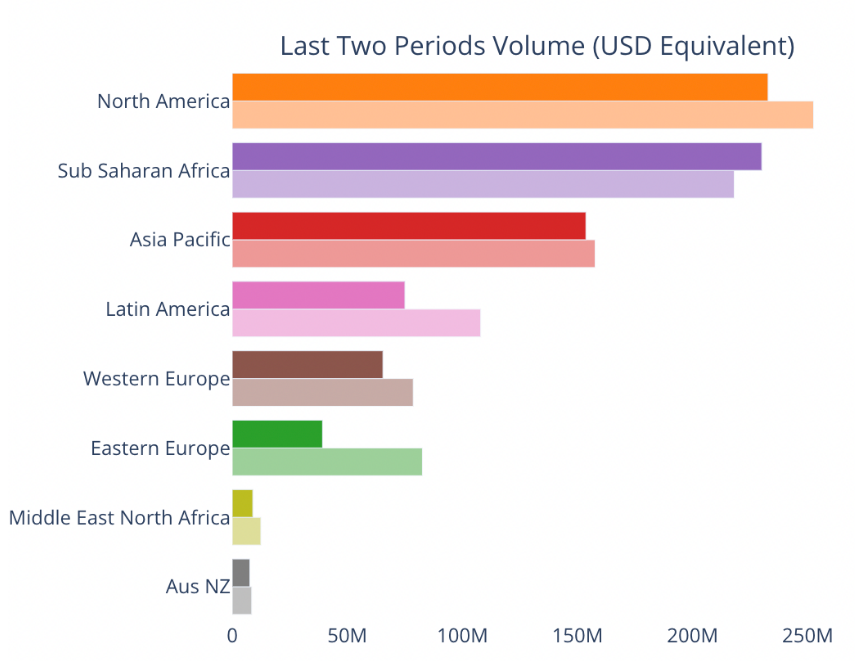 World cryptocurrency transaction volume for the period from January to March 2022. Africa, despite the incomparably weaker economy, is just behind the USA. Over 88.5% of transactions in Africa are carried out abroad, which is facilitated by low transaction fees. Source: UsefullTulips

Which cryptocurrencies can take part in the change?

Cryptocurrency creators appreciate the potential of Africa as a fresh market for the latest financial solutions and some projects have already started operations on this continent. Cardano is a good example.

Due to its speed, security and energy-saving, ecological ‘proof of stake’ transaction approval model, Cardano may become the leader of the African peer-to-peer industry. Cardano in the fall of 2021 also made the recently popular ‘smart contracts’ technology available in its ecosystem, which could revolutionize the implementation of financial contracts by eliminating the risk factor, ‘third party’ transactions and regulations, making transactions automated with maximum risk reduction. Cryptocurrency makers have already made steps to scale up services in Africa and are involved in a number of other projects on the continent.

What could slow down this process?

The main risk in the case of Africa is the restrictive introduction of government regulations regarding the trading of cryptocurrencies and their strict enforcement. Due to the specificity of the African market, there are also many scams related to cryptocurrencies that can weaken the positive sentiment of societies and limit the adoption of new technology. Another argument for introducing such restrictions could be the use of cryptocurrencies by criminals to shift funds and the use of digital technologies in large-scale criminal activity.

Will blockchain technology change the world then?

Such a statement is very bold, but without a doubt, blockchain technology can affect many areas of life, especially the finances of societies.

Developed countries implementing technology in the financial system can optimize supply chains, copyrights, digital identity or even accelerate and automate transactions. According to Goldman Sachs, Microsoft, working with EY, reduced the time needed to verify and receive royalties from 45 days to 5 seconds thanks to the implementation of blockchain technology. Thanks to its introduction in underdeveloped countries, their inhabitants will get a chance to develop and improve the process of goods exchange, it is important because trade is known as one of the pillars that builds the prosperity of the society.

The adoption of cryptocurrencies in Africa has a chance to accelerate if the majority of the continent’s inhabitants get access to tools such as smartphones, laptops and, above all, the Internet. All this means that cryptocurrencies can have a much wider global application than is currently the case, which is also confirmed by reports from renowned global institutions such as Wells Fargo, Goldman Sachs or technological giants such as Google.

Cardano, interval H4. The cryptocurrency has been moving in a strong downtrend since September 2021. The last local bottom was established on the day of Russia’s attack on Ukraine, when price slipped to nearly $0.70. The price dropped almost 80% from September highs. Bulls launched an upward correction at the beginning of March, however the upward move was halted around the resistance zone at $1.24, which is marked with 23.6% Fibonacci retracement of the last correction. Currently, the price is trading below the psychological $ 1.00 level. Should break higher occur,  another upward impulse may be launched. Source: xStation5