It’s All About The Fed

Today at 07:00 pm BST the Fed will publish interest rate decision and plans regarding shrinking its $9 trillion asset portfolio

The Fed will raise rates at the fastest pace since 2000

There is no doubt that the Fed will decide to raise interest rates by 50 bp. This possibility was communicated many times by Fed members, and the market is pricing in even 4 such moves in a row. However, it is worth remembering that such an increase will not come as a surprise and it is fully priced in by the market. That is why any suggestion in Powell’s statement or comment on future prospects will be crucial for the further fate of the dollar or stock indices. 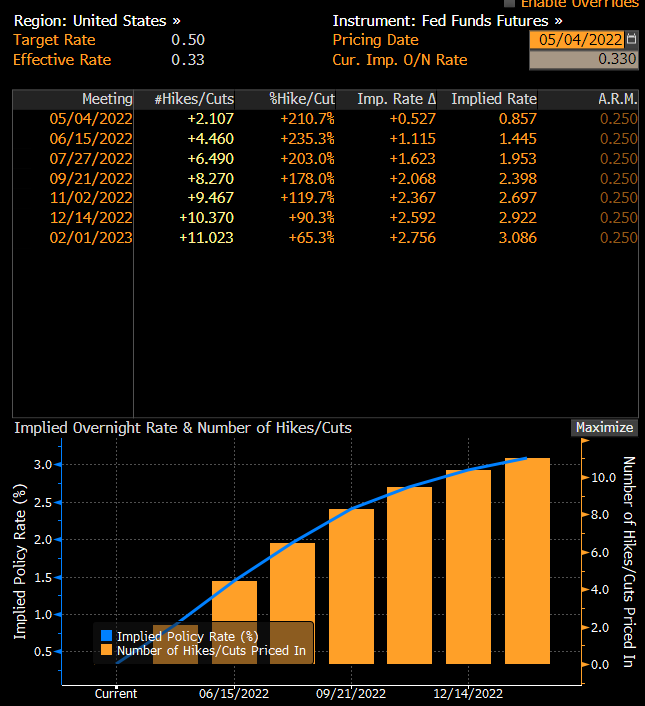 The market is already pricing-in 4 hikes by 50 basis points in a row. At the end of this year, investors expect interest rates around 3.0% level! Source: Bloomberg 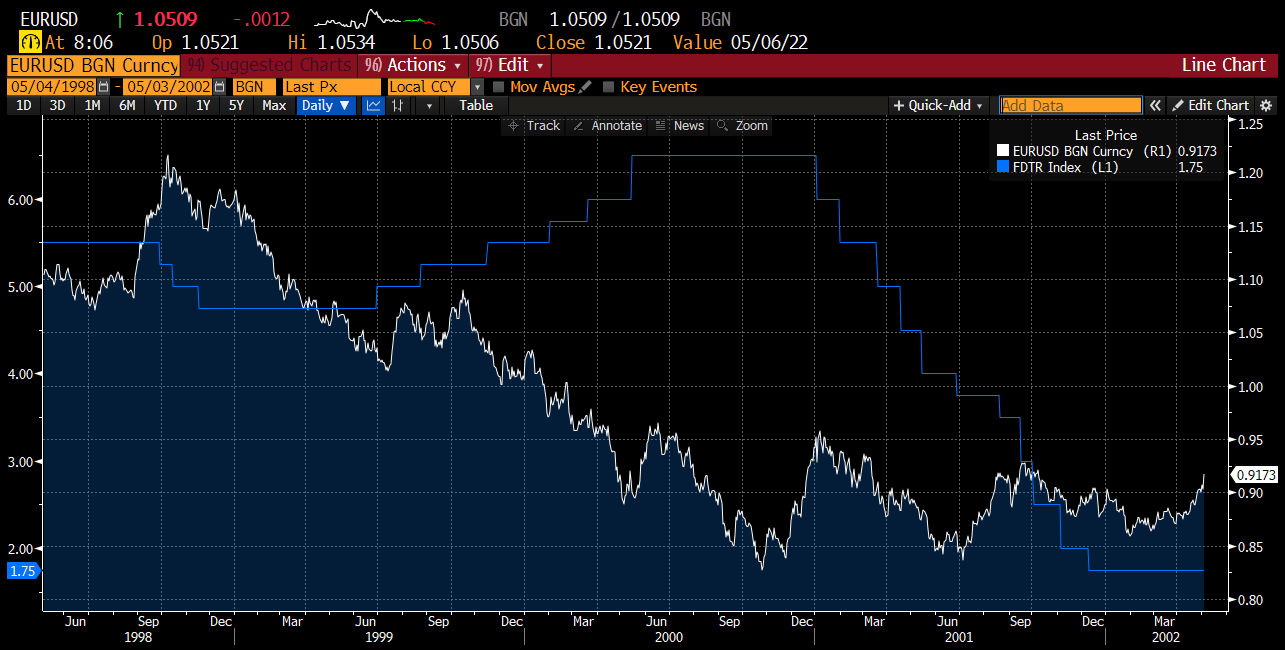 Previously 50 basis points rate hike took place in 2000. EURUSD rebounded for a moment, but it was also the last hike in the cycle. Now the situation is completely different. Source: Bloomberg

Can we expect a subdued statement?

The Fed is facing a lot of problems right now, besides huge inflation. Of course, the central bank has mentioned the problem of a hot economy many times, but it needs to pay attention to things like:

Lower consumption in the US may lead to another decline in GDP in the second quarter. The second thing is the slowdown in China. Further restrictions imposed in the country, or the huge weakening of the yuan, cause fears in the market. Moreover, the Fed’s analysis office points out that a potential 2 percentage points decline in GDP growth in China could trigger a 30% correction in the oil market, which in turn will lead to a massive shift in inflation expectations. Due to problems in China and a potential collapse in the global stock market, the Fed may decide to take a slightly milder approach towards tightening, similar to 2016.

However Fed has reasons to be even more hawkish

Most analysts do not expect an increase by 75 basis points, but such a move cannot be ruled out, given the very tight labor market. While inflation is much higher than wage growth, which is now just over 5%, it shows that the Fed needs to raise rates more aggressively to get rid of the demand side of inflation.

The Fed has an asset balance of nearly $ 9 trillion. Before the pandemic, it amounted “only” to 4 trillion. On many occasions, policymakers have signaled a desire for a faster reduction compared to 2018-2019. During this period, assets were reduced from $ 4.5 trillion to $ 3.7 trillion (the pace started at $ 10 billion and ended at $ 50 billion). Currently, the median of expectations points to a balance sheet reduction of 20 billion for government bonds and 15 billion USD for MBS. The highest forecasts amount to $ 60 billion and $ 35 billion, respectively. Certainly, a reduction above $ 50 billion would be considered rather hawkish, and exceeding the level of $ 100 billion a month could put additional pressure on stock markets.

What will the Fed and Powell do?

The Fed and Powell are likely to remain hawkish. At the moment, the risk of a slowdown has not materialized, and only warning signals have appeared. The Fed needs to deal with inflation quickly so that it can counteract a hard landing later. Nevertheless, there is a good chance that profit taking may occur, especially on markets that are currently oversold or overbought. On the other hand, if Powell announces the possibility of a 75bp rate hike in June, the dollar may have room for further appreciation and indices may continue to move lower.

Key markets ahead of Fed decision

The EURUSD pair is trading around 5-year lows, near the key demand zone of 1.0500. Recent consolidation suggests a potential exhaustion of downward pressure. On the other hand, in the case of hawkish surprise, a stop losses below the aforementioned support could be activated, which in turn could push the pair towards 1.0200 level within the next few weeks. Nevertheless, we see potential for profit-taking and a rebound to an important resistance area around 1.0800. Source: xStation5

Gold has the potential to resume its uptrend after recent profit-taking occured. However, the increases will probably not be too strong given the current macroeconomic and geopolitical situation. Major resistance can be found around $ 1880-1890 level. In the case of the hawkish Fed, price may fall towards $ 1830 level. Source: xStation5

Nasdaq (US100) will be very sensitive to remarks regarding hikes of 75bp. The nearest resistance is located around $ 13,333. However, if  FED communicates a potential 75bp rate hike at the next meeting or balance sheet reduction of $100billion per month, then US100 may fall sharply towards support at 12,350 pts. Source: xStation5